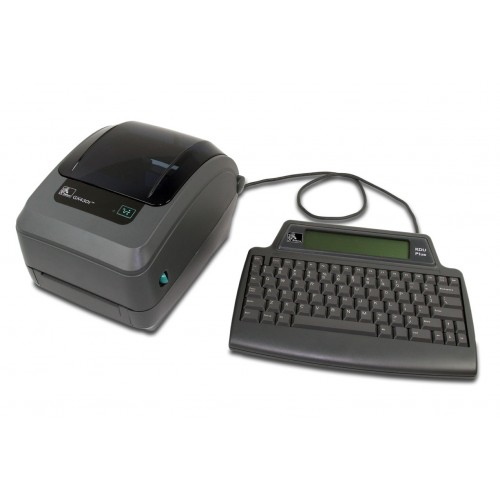 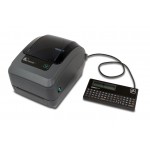 Designed for applications where space is at a premium, Zebra’s Keyboard Display Units (KDUs) connect directly to Zebra printers and eliminate the need for bulky host computers. Available in two models, the ZKDU™ and KDU™ Plus, these accessories are compatible with Zebra EPL and ZPL® programming languages—ensuring they operate with most Zebra desktop, high-performance and industrial or commercial printers.

The Zebra Keyboard Display Unit (ZKDU) is a terminal unit that interfaces with Zebra label printers in a standalone capacity.

Depending upon the print form’s format, the operator can be prompted via the form’s data entry format and the ZKDU’s form access and print controls to enter data, serial numbers, reprint quantity, and batch print quantities.

The ZKDU has sixty-two (62) keys and a 2-line, 20 character LCD display. The ZKDU is powered by and communicates with the printer through an RS232 serial port with a DB-9 (standard printers). The ZKDU includes a low current auxiliary serial port for attaching a scanner, scale or other peripheral devices.

The ZKDU has been designed to interface with many Zebra label printers that support EPL2 and ZPL II Zebra printer programming languages.

The ZKDU is strictly a terminal and does not have the capability to store data or configure ZKDU or printer parameters.

Search Omni Data Services to see if we have what you're looking for.